Cutler Law Firm Marks the Passing of Richard A. Cutler 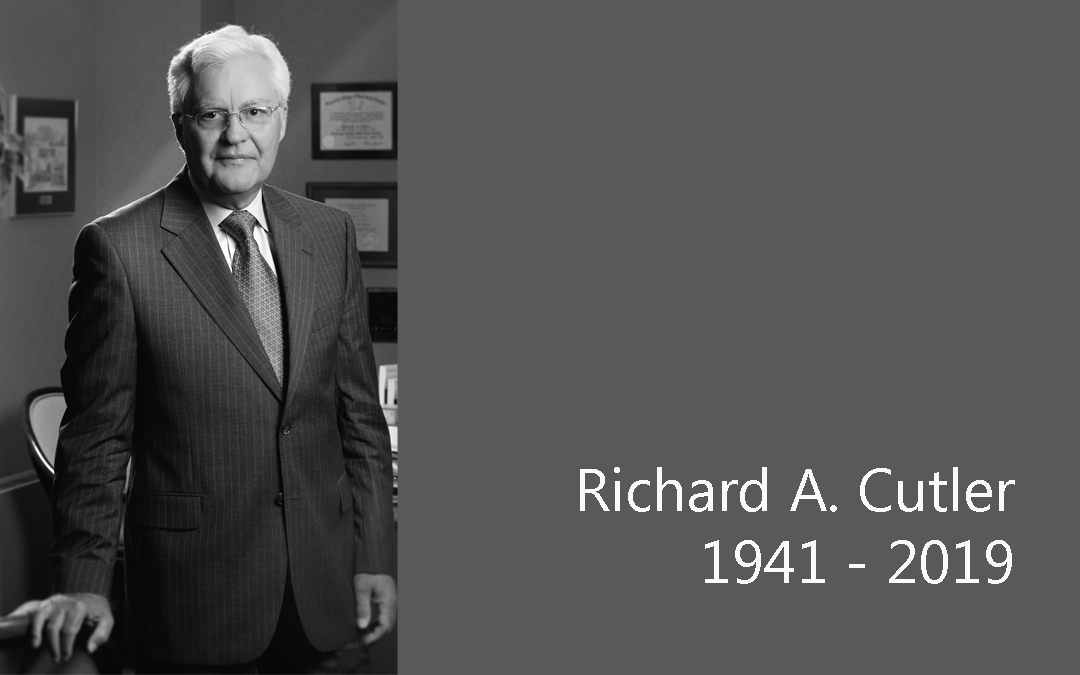 Richard Alden Cutler, 77, of Sioux Falls passed away peacefully on May 8, 2019, after a three-year battle with Glioblastoma brain cancer.  His memorial service was held at First United Methodist Church in Sioux Falls on May 13.

Rich was born on August 26, 1941, in Mitchell, South Dakota to Roland and Dorothy Cutler.  Rich grew up in Wessington Springs with his sister, Liz, and brother, Jim.

After leaving active military duty, Rich returned to South Dakota to join the Davenport, Evans, Hurwitz & Smith law firm where he practiced for 30 years.  In 1997, Rich formed the Cutler Law Firm with his son, Kent.  Rich was instrumental in the growth of the Cutler Law Firm from 4 to 20 attorneys during the past 20 years.   Rich served as attorney, business counselor, and friend to countless clients with whom he continued to work until he retired from the practice of law.  He took great pride in the fact that his family has continuously practiced law in South Dakota for four generations beginning in 1906.

Rich was not only a well-respected attorney, but an astute entrepreneur. During his career, Rich acquired a significant real estate portfolio consisting of many commercial properties, development land, and farm land.  In the early 1970’s, Rich founded Satellite Cable Services, Inc. which owned and operated cable television systems in Brookings and 60 other South Dakota communities.  Rich had the privilege of serving as the President and Chairman of the Board of the National Cable Television Cooperative.  Because that wasn’t enough to keep him busy, Rich purchased Palmer Gulch Lodge in the Black Hills in 1972 and developed the Mt. Rushmore KOA campground, which was the start of Recreational Adventures Co.  Recreational Adventures Co. is now the largest KOA franchisee, owning and operating 13 campgrounds spanning the northern tier of the United States from Oregon to New York and serving hundreds of thousands of guests each year.  In addition, Rich was a board member and owner of Enercept, Inc., a company located in Watertown that produces structural insulated panel systems for residential and commercial projects.

Rich was community minded and philanthropic.   He served as campaign chairman for the United Way and served on many boards including the South Dakota Community Foundation, Children’s Home Society, South Dakota Hall of Fame, Sunnycrest Village, Downtown Rotary, Sioux Falls Community Development Advisory Committee, and Sioux Falls Downtown Development Corp.  Rich served as Chairman of the Board of Trustees of Dakota Wesleyan University, the USD Foundation, and the National Music Museum at USD.  Rich also co-chaired Campaign South Dakota which raised over $133 million for the USD Foundation.  In 2007, Rich was recognized for his lifetime of accomplishments by induction into the South Dakota Hall of Fame.

Rich’s proudest accomplishment was his family.  As a young family, Rich and his wife, Sharon, spent as much of the summer months as possible at their Black Hills cabin with their three sons, Kent, Chris, and Justin.  This allowed Rich to be personally involved in the operation and development of Palmer Gulch and to spend time riding three wheelers and motorcycles with the boys.  Christmas was always a special time generally spent skiing with his family which grew to include eight grandchildren.

In more recent years, Rich became a collector of art by various South Dakota artists including Harvey Dunn and Oscar Howe for which he was a recipient of the Governor’s Award for Outstanding Support of the Arts.  Rich and Sharon particularly enjoyed spending the winter months at their home in LaQuinta, California, where they entertained friends and Rich played cards almost daily at LaQuinta Country Club.

Rich is survived by his caring wife of 56 years, Sharon; son, Kent (Carolyn) Cutler of Sioux Falls and their children, Dylan and Katie; son Chris (Natalie) Cutler of Hill City, South Dakota, and their children, Jac, Rebecca, and Abby; and son Justin Cutler of Hill City, South Dakota, and his children, Maddie, Miles, and Max.  Rich is also survived by his sister Liz (Arlan) Barber, of San Diego, California; and his brother Jim (Joyce) Cutler of Westford, Massachusetts, and many nieces and nephews.